Marxism is a science. Science can be falsified. Science is an open theory that is modified according to new evidence, new finding of knowledge, and new discovering of facts. Marxism as a science is also an open theory that the theory develops based on the new reality due to the evolution of the human society that Marx himself did not experience in his life.

Marxism undergoes three phases of evolution. The first phase is Marx and Engels. Marx proclaimed that communism can only be reached in the world as a whole, and be reached when the material is abundant due to a high level of productivity. This claim is still valid. Phase two is Lenin and Stalin. Lenin said that in the imperialist stage of capitalism, the proletariat can take power in one country even though other countries are still capitalist.

The capitalist revolution failed in China before 1949 because western powers kept invading and dominated China such that wealth kept flowing out of China that capital accumulation for industrialization can never be accomplished. Chinese national capitalists could not become an independent political power. The capitalists in China became an attachment to western imperialists and colonialists that China was quasi-colonialized.

Today, the world is dominated by the US, the hegemony capitalist. Hegemony capitalist hindered capitalist development in the developing countries, just as China had the difficulty to develop capitalism before 1949. The proletariat can liberate themselves only by liberating the whole Human Being. Communism can only come in the world as a whole and after capitalism is well developed. The BRI is to help developing counties develop capitalism. Hegemon has a monopoly on the world economy. The US is taking monopoly profit, that destroys the market competition, prevents the developing country to be industrialized. So China is pushing capitalism, such as globalization and against hegemony, in the world, the necessary step towards communism. In this sense, China is toward communism via capitalism.

One of the great discoveries of Marx is the Surplus Value. Marx discovered surplus value through the study of capitalism. Surplus value at the individual level is that a worker creates more value than his consumption for labor reproduction (or living cost in layman’s term). On the ideological aspect, surplus value restores the dignity of labors and set a solid foundation for the spirit of revolution. That’s why capitalists hate Marx.

As a scientific discovery, however, surplus value can be applied beyond and outside the capitalist society. Surplus value, what a society produces more than it consumes, is a necessity for expanded reproduction, or necessity for human progress. Humans make progress by producing more than consuming, so to have accumulated capital. Accumulated capital, or solidified labor, is the material foundation for technological advancement. If human consumes all it produces, then the society can reproduce only at the same scale, and stop progressing.

Exploitation is different from surplus-value. It is fine to have profited by harvesting surplus-value, as long as the capitalists do not suppress the living standard of the workers in order to squeeze more surplus value from its production. Exploitation is to suppress the living standard of the workers in order to have more profit. A production entity may produce no surplus value due to its low efficiency but still profit by suppressing the salary. That’s exploitation. If a capitalist consumes his profit, then that part of the profit is not a surplus value from the society’s point of view. Because that portion of the profit is consumed and not be used for expanded reproduction. For society as a whole, there is no accumulation of capital and no progress. That’s the unequal distribution of wealth that exploits the poor to enrich the rich.

China makes a profit in Africa but also builds infrastructure (the solidified labor, the formation of real capital) for Africa. It is good for economic development and good for human progress. Surplus value is well used for Africans because it accumulates capital in Africa and for Africa. Infrastructure is the accumulated capital, and it is in Africa, for the development and progress of Africa. BRI does create surplus values and the more surplus value created, the more progress in the society where BRI projects are implemented.

What should a communist  do after the proletariat taking power in one country? Russian Revolution established a Soviet Russia. Soviet Russia eliminated private ownership. The planned economy has state-owned enterprises and collectively owned farms. Because of the state or collective ownership, there should be no class struggles, right?

Are there classes and class struggles in countries where the communist party is in power? That’s the question that Khrushchev and Mao held different opinions. To this question, Khrushchev is negative while Mao is positive. This difference made China split from USSR. And Mao is right. When Soviet Russia collapsed in 1992, the Russian people are apathetic to the fall of the communist party. The cadres in Russia formed a privileged class. Mao was alarmed and launched the Great Proletarian Cultural Revolution, a class struggles within the Communist Party of China. Mao’s Cultural Revolution might be an overdone and hurts many innocent elites. Yet, Mao did successfully prevented China from collapse together with the USSR. Even today, the west is futile in its attended color revolutions in China, thanks to the Cultural Revolution.

Deng disagreed with Mao. He thought class struggle within the Communist Party is absurd. The difference between Mao and Deng is a very fundamental problem for Marxists.

Marxism does recognize that the raising of productivity level is the most fundamental force to promote human progress.

Marxism also recognizes that class struggles play a key rule in advancingg human progress, as  stated in Communist Manifesto. Mao  correctly believed that class struggles were the most important task of establishing  proletarian power when Red China was seriously threatened  by the world imperialists. Deng was also right. After the peaceful development environment had secured, the main task should be economic development, not the class struggles. The key achievement of the Cultural Revolution is culture. Mao educated the Chinese people  the danger of social stratification being solidified into rigid classes. Mao’s cultural revolution saved China from collapse together with the USSR.

Marx predicted that communism would come when capitalism fulfilled its historical role, and he never told how the transition from capitalism to communism would proceed. He did not know that the proletariat could take power in a country. How socialist countries realize communism is a myth around China.

If China is a capitalist country under the rule of the Communist Party of China, what should China do toward communism? Making another proletarian revolution by the violent class struggle? Is the Cultural Revolution not class struggle enough and not violent enough?

Socialism with Chinese characters is capitalism led by the Communist Party of China. The task of China is to transcend from capitalism to communism. Communist society means the elimination of class. Class struggle reinforce the classes in a society. Capitalists in China today are from the poor, from the fluid social mobility in China, from the capitalist revolution led by the Communist Party of China. They do not accumulate capital through bloody exploitation. Some of their initial accumulation may come from the misappropriation of  State or collective property during the transition from a planned economy to a market economy, while others may come from the accumulation of surplus-value. This capital is clean. Virtually all of them are not from exploitation. It makes no sense for China to use violent revolution to deprive the property of the capitalists of modern China.

China has set an example that one can get rich without making others suffer. One can accumulate capital without exploiting others. One can be relatively poor but still has a decent and dignified life. In other words, society can progress without relying on class struggles. When people are organized through the Communist Party to take charge of their own fate and their own country, they recognize the social stratification, maintain social mobility in order to prevent the stratification classes, downplay the role of class struggles, focus on economic development, classes will vanish in due time and capitalism will transcend into communism.

Class struggle is a very important concept in Marxism, especially to justify the revolution against exploitation. However, we should not overemphasize class struggles when there is no exploitation.

Marx was influenced heavily by Hegel philosophically. He considered that social progress is propelled by class struggle. That’s Hegel’s philosophy that motion is caused by the conflict of Being and Nothing. Communist manifesto stays that human history is the history of class struggle. Of cause, communist society has not classes and therefore cannot propel social progress by class struggle. Taoist philosophy is also a dielectric philosophy. Taoism considers motion is not by conflict but by the harmony of Yin and Yang. Xi promotes harmony domestically and Shared Future of Man Kind internationally is in accordance with Taoist philosophy. Classes exist in Human society for the last five thousand years of private ownership of property. Deng and Xi downplay the role of class struggle represent the Marxism development in China, or Marxism with the Chinese characters.

With the globalization in the era of a monopolistic capitalist world, the conflict between classes is less important than the conflict between nations. The Chinese revolution is more of a national revolution than a class revolution. Communist Party of China united all classes in China to resist the invasion of Japanese imperialism. If class struggle is still a correct Marxism theory, then classes are categorized as nations in the globalized economy. If WWI and WWII were wars between imperialist countries fighting for control of resources and sphere of influence, then the struggle between imperialist countries finished after WWII. After WWII, America consolidates the developed countries, the imperialist powers, to exploit developing countries together. America established the world order of the structure of the north and the south. The developing countries can never finish their industrialization and modernization due to the so-called middle-income-trap. Wall street can assassinate a country’s economy by creating a regional or national economic crash to make a sudden wealth transfer from that country or countries to the north. After the collapse of the USSR, huge wealth flowed to the west in name of the free movement of international capitals. The developing countries are experiencing what China experienced from 1840 to 1949 that their politics and economy are dominated by imperialist countries and keep being exploited. So if the class struggle is still a valid Marxism theory, then today’s class struggle is the conflict between G7 and South-South Cooperation. China advocates the international relationship of mutual respect and win-win cooperation without attaching to any political or ideological condition. China is a Marxism country in that it helps the developing countries to get rid of the influence of the imperialist powers to develop their economy, industrialization and modernization. China is therefore a communist country that pushing capitalism without exploitation in the world.

Marx got this conclusion because Marx did not perceive that proletariat get into power in one country. If Man can control the moving of capitals in the market according to Man’s will, then there will be no alienation and we will reach a communist society without the abolition of private ownership. How can we tell whether the capital has its will or Man has his will in the market? One important trait is that in the capitalist society, there is the cycle of economic boom and crash. Man does not want war, does not want hunger, does not want an economic crash. Yet Man cannot avoid these disasters because it is the capital’s will for profit running the world, not Man’s will running the world.

China eliminates the alienation of capital, reconciled the conflict between private ownership and social production, without the abolition of private ownership. This is a Marxism of Chinese characters. 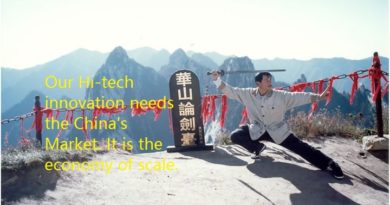