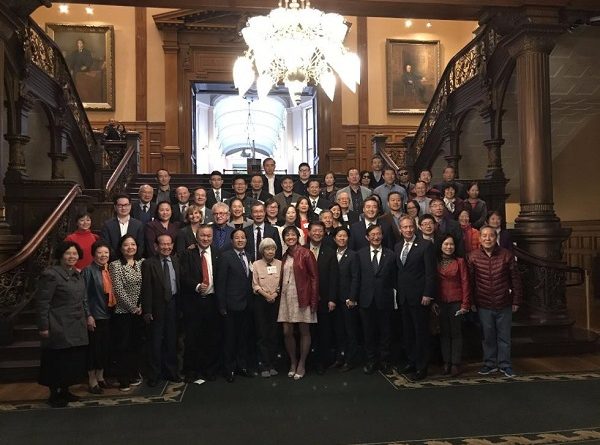 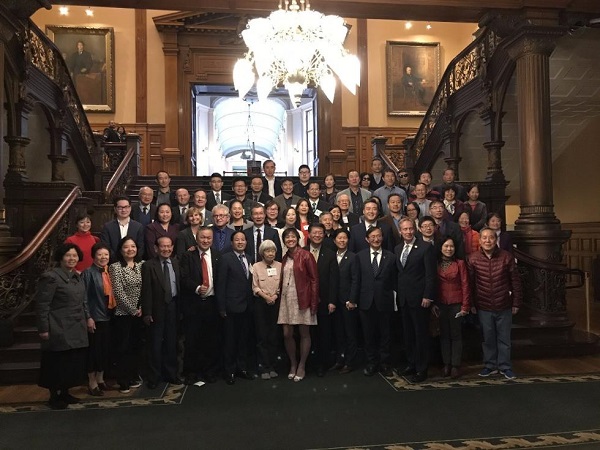 On the afternoon of October 26, 2017, Ontario legislature unanimously passed the Motion 66 commemorating the victims of Nanjing Massacre. Nanjing Massacre is also known as the Rape of Nanking, was an atrocity committed by Imperial Japanese Army after they captured Nanjing, the capital of the Republic of China at that time. 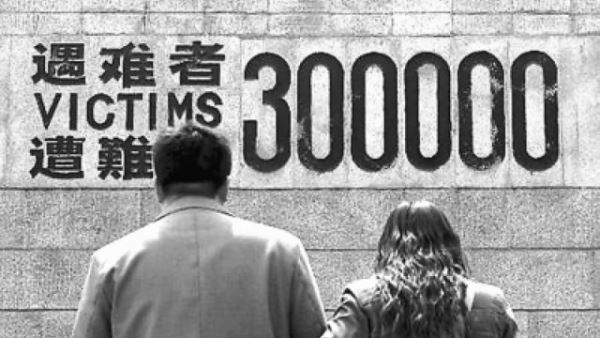 “On December 13, 1937, Japanese imperial forces initiated a six-week massacre in the then-capital of China, Nanking. More than 200,000 Chinese soldiers and civilians were indiscriminately killed under the command of General Iwane Matsui. While the precise number of casualties will never be known, this atrocity goes beyond statistics and ethnicity.” Ms. Soo Wong said in her moving of the Motion on Thursday.

Motion 66 was introduced by Ms. Soo Wong, MPP for Scarborough-Agincourt.  By passing the Motion 66, Ontario Legislature acknowledges and honor the over 200,000 victims of the Nanjing Massacre, as well as foster learning of the Nanjing Massacre and other World War II atrocities in Asia by formally recognizing December 13th in each year as “Nanjing Massacre Commemorative Day” in the Province of Ontario.

“To fully understand the significance of this motion, it is crucial to know the historical background of this crime. December 13, 1937, marks a horrific day in world history. On this day, the Imperial Japanese Army moved into the then-Chinese capital, Nanjing, and began what would be known not only as the Nanjing Massacre, but also as the Rape of Nanjing. Over a period of six weeks, the Imperial Japanese Army committed mass atrocities involving the rape and murder of innocents. Historians note that in 40 days, over 200,000 people were executed. The acts of looting, burning and killing that ensued were relentless, dehumanizing and horrifying. The massacre involved men, women and children who were brutalized and humiliated through acts of sexual violence, which earned the atrocity its own terrible moniker, the Rape of Nanjing. The victims of this massacre were treated as subhuman, and they were treated as numbers”, Hon. Michael Chan stated in his debate in supporting the motion.

“During the six weeks that the Imperial Japanese Army decided to rape and pillage and murder the city of Nanking—it was called by westerners “hell on earth.” It was, because close to 20,000 to 80,000 were raped. Some girls as young as eight years old were raped. Pregnant women weren’t spared. According to the research I’ve done, some pregnant women had their bellies slit open. There was massive carnage in Nanking. Some recall that the streets were red with blood. It was a genocide”, said Ms. Lisa MacLeod in the debate of the motion.

“large-scale acts of violence in history need to be widely known, studied, remembered and vehemently condemned so that they are not repeated ever again. If we fail to expose these crimes against humanity and if the perpetrators of such crimes think they can get away with such carnage, and if we allow the deniers of these crimes to sway us to stay silent, we are accomplice and complicit to the crime.” Mr. Raymond Cho, MPP for Scarborough-Rouge River, said in support of Motion 66.

“If we want to help ensure that we don’t repeat the mistakes and massacres of that time, then we need to first remember that they actually happened, and to ignore all those who deny that they were real. We need to remember that assumptions of racial or national superiority lead to the very darkest nights of human experience. We need to remember that scapegoating of national groups, religious groups and ethnic groups, when mixed with explosive anger over desperate economic circumstances, can lead to this kind of large-scale human tragedy, these kinds of large-scale human crimes”, said Mr. Peter Tabuns, MPP for Toronto-Danforth.

“For the right-wing and nationalist forces in Japan that claim that the massacre never happened, it is very important—very important—that the leaders of that country note that the reality is understood, acknowledged and recognized around the world. We in this chamber can help with that project, can help acknowledge the reality—make it undeniable.” Mr. Tabuns added.

“In Ontario, we stand for the belief that all human beings are entitled to inalienable universal rights. We must never forget the atrocities committed against the people of Nanjing, just as we cannot forget the unjust and tragic acts of violence committed against other marginalized groups around the world. As the 80th anniversary of the Nanjing Massacre approaches, this motion reinforces the need to promote peace and human rights both at home and abroad”, said Honourable Chris Ballard on the floor.

“To remember Nanking is not about singling out a particular culprit—although there is. It’s because many countries around the world are not proud of their pasts either, Canada being the first. The way it treated indigenous communities calls for constant reminders of our own capacity for racism and for cruelty, and it calls for demonstration of an ongoing commitment to reconciliation. The way Canada and the US treated the Japanese during the Second World War reminds us of the duty to eradicate discrimination as well”, said Ms. Nathalie Des Rosiers in support of the motion.

“There’s the Holocaust in the Jewish community; the Armenian genocide; the massacre of Sikhs—which is considered a genocide in Ontario—after Indira Gandhi was killed; the Rwandan genocide; the Holodomor, when the Ukrainians were starved; rumours that Rohingya Muslims now are going through a horrific time in Myanmar; the Yazidis—we are still crying for the Yazidis and what they’re going through; in Syria we are concerned that the Coptic churches are still being blown up; Tamils in Sri Lanka have a terrible history; and of course North Korea and the Korean sex slaves”, argued Mrs. Gila Martow that Nanjing Massacre should be commemorated just as the other Holocaust Ontario recognized.

“I can’t imagine what it’s like to have people who have gone through what the people of Nanjing went through, and have people deny—and not only deny but actively, actively try to suppress history. Because we all know the reason history is so extremely important is that if we don’t remember history and we don’t actively pursue history, history can—and, tragically, history will—repeat itself”, said Mr. John Vanthof, angering against the Holocaust deniers.  In concluding his speech, he said: “It’s not only incumbent on us to pass this motion today, but incumbent on all us to ensure that the Nanjing Massacre is—not celebrated, but that it’s never, ever, ever forgotten. This, in our way, is one way we can do it. I sincerely hope that before this year passes, not just the motion, but the bill (Bill 79), becomes a law so we can do our part”.

In supporting Motion 66, Mr. Han Dong also urged the legislature to pass Bill 79. Regarding Ms. Wong and her Bill 79, He said “more than 100,000 signatures were collected supporting the bill. Her tireless advocacy resulted in this House unanimously passing Bill 79 at second reading. The bill is currently in the legislative process, which shall be respected”.

Mr. Bob Delaney cited the quote of American author Herman Wouk: “The beginning of the end of war lies in remembrance”, in supporting both Motion 66 and Bill 79.  He called out: “let us in Ontario use December 13 each year to assist with understanding, education, peace and progress—not just between China and Japan, not just among Asian nations but to foster peace among all the world’s nations. That’s the spirit of this motion and the proclamation bill it supports. I encourage all members to support it”.

Motion 66 and Bill 79 are important because neo-Nazi ideology is rising. There were 98 far-right extremist rock concerts in Germany in the first half of 2016. Under the influence of the far-right extremism in the globe, a mass shooting happened at Sainte Foy, Quebec on January 29, 2017. Why are neo-Nazi ideas still active after 70 years even though we have Holocaust Remembrance day every year? We remember the Holocaust in the concentration camps in Europe during WWII. However, the Holocaust during WWII in the Far East is virtually ignored on Holocaust Remembrance Day. German and Japan were both fascist countries during WWII. Both of these Axis countries were racist and waged brutal wars to their neighbors, carried out atrocities in their expansionist wars.  Nazi German inflicted 50 millions of casualties in Europe while Fascist Japan caused 50 millions of casualties in the Far East. Many factors contribute to the rise of neo-Nazi ideas. Ignoring the Holocausts by the Axis in the Far East is one of them. Europeans can travel to Japan, and read news about the Japanese worship at Yasukuni Shrine where the Holocaust war criminals are enshrined.  If we stigmatize the Holocaust in Europe while ignoring the adoration of war criminals in the Far East, we are leaving a side door open for Neo-Nazi ideas to come back. Motion 66 and Bill 79 are important for preventing racism, xenophobia, and hate in our precious multicultural society.

By passing of Motion 66 in Queen’s Park, MPPs reaffirm our commitment to human rights. As Hon. Chris Ballard said: “In Ontario, we stand for the belief that all human beings are entitled to inalienable universal rights. We must never forget the atrocities committed against the people of Nanjing, just as we cannot forget the unjust and tragic acts of violence committed against other marginalized groups around the world. As the 80th anniversary of the Nanjing Massacre approaches, this motion reinforces the need to promote peace and human rights both at home and abroad”. 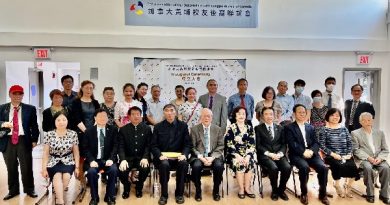 The Opioid Crisis the Double Abuses

China is not an Atheist Country